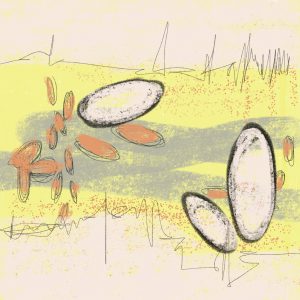 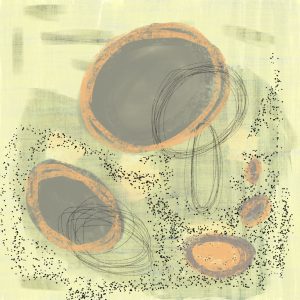 The discussion about digitalization within Art History is really diverse- some concrete examples shall give you an impression of how complex the topic is worked on within the Arts.

Performance Artist and Musician Laurie Anderson already studied programming language of computers in the 1980s and used it in her performances amongst other technical elements, such as video projections or voice distorters.

The Artist Duo Hörner and Antlfinger discuss the relationship between humans, animals and machines within their work. They use different elements of digital media and create videos as ‚Le nouveau OMIZA‘ or the computer animation ‚L’après-midi d’un avatar‘.

The use of Apps and touchscreens is another field of interest for Arts History today:

Since the opening of Apple’s App Store in July 2008 many artists have discovered the potential of the new apps and are integrating them into their work. The artists David Hockney and Jorge Colombo are seen as pioneers in this area (Leibowitz, 2013). Hockney’s iPad work is already on exhibition in single shows, Colombo’s finger iPad paintings are decorating the front page of the New Yorker.

“Sometimes the construction of a new art movement requires the destruction of another one, but here there is no destruction, just a new toolbox, with app developers vying for the masses to create with their latest and greatest tools.”
David Scott Leibowitz

The use of digital media within Arts Therapy is firstly described in the 1980s by Weinberg (1985) and Canter (1987) (van den Berg, 2012). Back then Weinberg discovered that patients with physical limitations profit from Arts Therapy with a computer as there is only little physical effort required to move a computer mouse (Parker-Bell, 1999).

These first experiments with new media were seen critically by some art therapists. They followed the opinion that Art Therapy should be limited to Painting, Drawing and working with clay.

Until today there are some therapists who don’t acknowledge digital media as art material. They assume that clients already are flooded technologically and that the media disturb the art process. Furthermore they are convinced that digital media lack important haptic qualities that can be found within traditional art material (Orr, 2012).

On the other hand there are also therapists who see digital media as art material with own possibilities and boundaries. It’s supposed to widen the scope of action within Art Therapy, but not to replace the classic materials (McNiff, 1999).

”No art tool- including the computer- suits all needs or situations, but most can be used well in a therapeutic context if the therapist knows the properties and potentials they hold“.
Barbara Parker-Bell

Art therapists working with digital media are able to name clear advantages. Digital material doesn’t need much storage but one is still able to use all the colors and tools without the need to prepare a lot or to clean afterwards. Furthermore it’s possible to store a huge amount of work within the smallest digital space and one has permanent access to it, for example to talk about the therapeutic process (McNiff, 1999).

Another advantage is the possibility to save different stages of the emerging work. The original work can be preserved while it’s possible to edit it in different programs with regard to contrast, background, etc.

Through saving the single steps of the work in progress important information about the therapeutic process is provided as it is mapped within its different stages (McNiff, 1999; Parker-Bell, 1999).
Mistakes also become less tragic as they can be reversed. It’s possible to create different versions of one picture. The client then can decide which version reflects best what he or she wants to express.

These aspects allow working more freely because one is invited to experiment (McNiff, 1999; Parker-Bell, 1999). In the end it also strengthens a persons self-confidence if they learn a new program and make the experience that they can handle it well.

McNiff also describes the limitations of Digital Art Therapy: it lacks the olfactory sense as it’s not possible to smell the different materials. It’s also not possible to interact physically with the different materials. Therefore according to him Digital Art Therapy will never replace the three dimensional presence of something that is ‘really made’.

On Cathy Malchiodi’s website one reads that she developed the use of Digital Art Therapy since the release of her book “Art Therapy and Computer Technology: A Virtual Studio of Possibilities” in the year 2000 and that she uses the iPad by now as well. She describes working with the iPad as highly suitable for people with autism and gives an example of her practice with the help of a short video.

Janetta Robards explored the possibilities of an iPad for Art Therapy with the help of an autoethnographic self experiment. She describes the iPad as her new artistic companion she uses for creative expression.

Michele Wood, art therapist and lecturer in Great Britain, made a study trip to the US in 2015 to discover more about the possibilities of Digital Art Therapy within palliative care and to gather information for possible research. In her published field report she also writes about iPads within Art Therapy in hospice care.